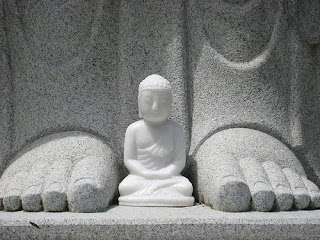 As a parent of two preschool children, I've recently noticed that there are very few resources for raising your children Buddhist. Tricycle ran an article a few issues back, but it was pretty skimpy and struck me as lip service more than anything else. A quick internet search yielded only a handful of sites and only one book title (If the Buddha Had Kids: Raising Children to Create a More Peaceful World by Charlotte Kasl, Ph.D.). Try the same search for raising your children Christian or Jewish, and your options will increase exponentially. What's up with that?!

Did anyone notice in President Obama's inaugural speech that he acknowledged Christians, Jews, Hindus, Muslims, but not Buddhists? You wonder why? The fact is that the Dharma absolutely will not take a solid foothold in the West until we as Buddhists recognize the importance that Buddhism can play in children's lives. I know this is a touchy subject for some who feel that children shouldn't be "indoctrinated" into a religion, and I agree; but as it is, American children are already being indoctrinated into a culture of greed, materialism, and irresponsibility. So what choice do we have?

Buddhism is a relatively new religion in America, arguably less than a century old. But given the growing availability of Zen and Buddhist centers in this country, you would think (or expect) there to be some guidelines, or suggestions at the very least, on how to raise a child Buddhist. But there isn't. 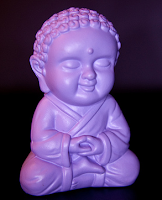 I say it's about time there is.

My wife, not a Buddhist, said to me, "You know, I might be interested in going to the Zen Center if there was something for me and the kids to do while you are meditating." Some family crash course in Buddhism, perhaps. And I would love to take her up on it, but no such program exists.

Granted, Buddhism always has and probably always has been a solitary religion, in the sense that while other religions are congregating, Buddhists are meditating. I got that. But in a country that places so much emphasis on children, Buddhism is surprisingly silent in this regard. And this doesn't only extend to children, but to families as well. Western Buddhism, as a whole, is not very family-oriented. It's about time we filled that gap.

A few miles away from where I live there is a Sri Lankan Buddhist temple that offers Dharma classes for children, but this is for Sri Lankan children. In addition to a language barrier, there is a cultural divide that would literally leave me and my children dizzy. So what does that lead a Buddhist parent to do?

I think part of this has to do with the fact that the majority of Western Buddhists are converts. So maybe they don't know how to raise Buddhist children. But it's about time we learned. We need to get our butts off the cushion (it's not often you hear that expression!) and start considering how we're going to insure the Dharma's continuance for the next generation. 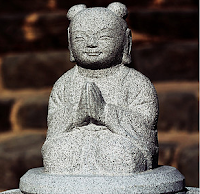 Some ideas are: perhaps a senior student could lead Buddhism classes for children or family members while parents meditate. Not babysitting, but teaching--the Four Noble Truths, Eightfold Path, mindfulness, and of course, meditation. Buddhist parents could also attend. You don't need to be a huge Center to offer a program like this. It's about reorienting our values more than it is about our resources. Where there's a will, there's a way. But first, there has to be a drive. And frankly, for the most part regarding children, I don't see it on the web, in literature, or even offered in Zen centers (at least those with websites).

I would love to hear anyone's thoughts on this subject. Please offer me some suggestions or resources.

Buddha photos borrowed with permission from flickr users: ~Mers, Karol A Olson, and JCT(Loves)Streisand.
Posted by Unknown at 12:38 PM