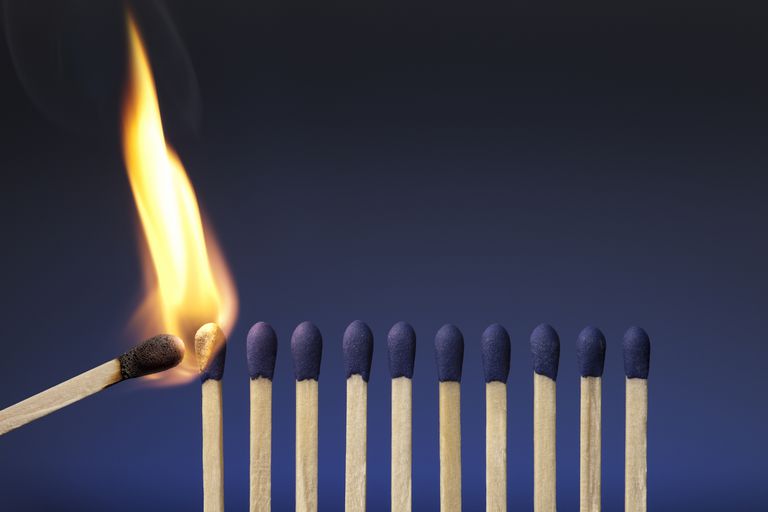 Image borrowed from: https://www.thoughtco.com/definition-of-chain-reaction-604899
Posted by Unknown at 11:33 AM No comments: 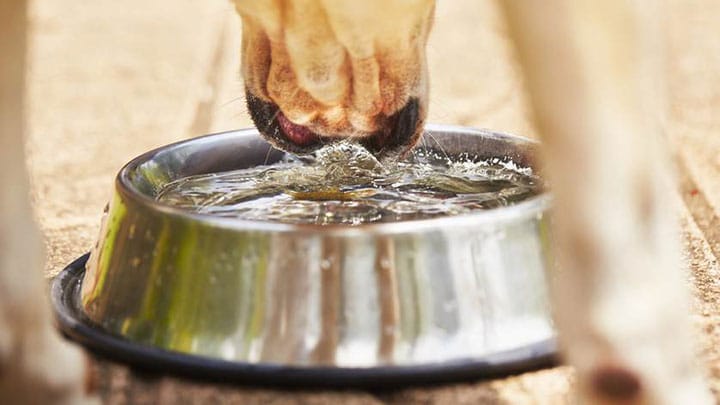 Yesterday, as I was meditating, I heard the most delightful pinging sound, almost like a note being played on a xylophone. Curious, I listened intently to discover its source; then I heard a faint jingling, accompanied by a slurping sound. And punctuating all of this was this intriguing xylophonic pinging.

It was my dog drinking. His water bowl was almost empty, so his flicking tongue made this intriguing metallic percussive sound against the sides of the bowl.

In a sense, that's Zen--moment to moment awareness of the mystery of life. It's not about achieving heightened states of god-like awareness or emotional aloofness. It's about awakening to the reality around and inside you, ones ordinarily drowned out by the confusing din of thoughts and emotions.

Life and reality are mysterious, always one step beyond the intellect's habit of and addiction to labeling things, trying to pin reality down the way butterfly collectors do their subjects. The ever-curious mind asks, "Where is the pinging sound? In the bowl, my ears, the air between the two, or better yet, my mind?" But such questions evade the fundamental experience itself.

Life happens prior to words. Birds don't call themselves birds, atoms don't asked to be called atoms.  Those are human conventions, albeit very useful ones. Labeling and defining can be useful tools for curing diseases and building cars, but they can become cruel tyrants if we mistake them for the world itself. Reality in non-binary; it's slippery and defies final definitions.

This is why in Zen we say that not-knowing is most intimate because it allows a ping simply to be. Life is truly mysterious so pay attention.

Posted by Unknown at 8:30 AM No comments:

War is Terrible - So Oppose It with Iran

If there is one thing that intelligent people of conscience should agree on, it's that we should avoid war at all costs. No single event or governmental policy can be more destructive to life on this planet than war. Regardless of race, creed, political persuasion, all sane people should oppose war whenever it is possible because war is catastrophic. It is barbaric, cruel, fruitless, and ultimately, self-perpetuating.

I hope that, despite how divided America currently is, we can agree on that point.

I write this because of the recent assassination of Iranian General Qasem Soleimani, an event which may provoke a war between the U.S. and Iran. I don't sympathize with the oppressive Iranian regime in any way; I simply oppose going to war with them.

If the past two decades have taught the world anything about U.S. foreign policy in the Middle East, it's that going to war is an egregious blunder. President Bush's invasion of Iraq has been a 17-year nightmare that destroyed a nation, killed and displaced hundreds of thousands of civilians, and contributed to the birth of ISIS. Going to war with yet another country in that region is a terrible proposition, and unfortunately, a genuine possibility.

I sincerely hope that in several months I look back on this blog post and laugh at how unnecessarily worried I was today. But, based upon America's current political climate, I fear that this will not be the case. Rather, that in the short future we will look back on events of the coming weeks and wonder, "How did we allow this to happen? How did we wind up in yet another war?"

The sad and yet encouraging fact that history teaches us is that war is preventable. We don't need the advantage of hindsight to identify the tell-tale indicators that lead to conflict between nations. We simply need to be committed to finding an alternative to bloodshed, which often means the uncomfortable act of swallowing our national pride and devoting ourselves to the ingratiating, ignoble reality of diplomacy and compromise, rather than resorting to violence.

Regardless of whether you believe that this provocation with Iran is a tool for the Trump administration to distract the world from his impeachment hearings or a way to galvanize his political base, we should regard it as a genuine possibility to go to real war, in which real people will die.

17 years after the terrible decision to invade Iraq, it's time that America learns from its mistakes and avoids going to war again at all costs.

This is not a rant against American aggression or failed foreign policy; it's a plea to all people of conscience to oppose war. I'm afraid to check today's headlines for fear of how Iran might retaliate, and just as importantly, how America will greet that hostile response with open arms.

Whether you are a Christian, Muslim, Hindu, Jew, Buddhist, Jain, Sikh, humanist, or atheist, Republican or Democrat, it is our responsibility as sensible beings to oppose war whenever possible.

This is that moment.

Posted by Unknown at 9:49 AM No comments:

Cause and Effect Are Obvious

One of the earliest lessons that I learned about Buddhism is also one of the most valuable: you get what you put in. If you plant corn, you get corn. If you fill your head with angry, self-centered thoughts, then it serves to reason that the quality of your life will reflect the content of your mind.

And yet people are often mystified by the simple cause-and-effect processes that govern the world and their lives. They want to hack the system, so to speak, and find the easiest route to happiness without sacrificing the comfort of their lives. But life doesn't work that way.

Anyone who has ever been on a diet can attest to this fact: change requires...well, change. If we continue the same patterns of thinking and behaving as we habitually have, then it's foolish to expect different results. It's simple cause and effect.

This reminds me of a joke.

A man goes to the doctor, who asks him, "What's the problem?"

He raises his arm and says, "It hurts when I do this."

"Then don't do that," the doctor says and walks away.

Buddhist practice doesn't seek some mystical loophole in the laws of the universe that will allow us to defy gravity; rather, it is completely grounded in the law of cause and effect. It fully recognizes the mundane fact that we get what we put in. If we want to find peace and happiness, then our minds and hearts must reflect that.  If we eat like shit, then that's how we will feel.

We cannot expect to find peace if our minds are constantly racing, scheming about the best way to exploit a situation or other people. Selfish people have selfish hearts, just as hungry people have hungry thoughts.

If we genuinely want to be happy, then we must stop the behavior that cause us to be unhappy. Transformation requires sacrifice. There is no way around it. Cause and effect are obvious.
Posted by Unknown at 3:25 PM No comments: