Too many words have been spoken about Buddhist practice and "Enlightenment," this talk included. Zen is known for its direct expression of the Buddha Mind. Chan Master Uji held up his finger to express the Dharma, Linchi shouted, and Seung Sahn smacked the floor. The hand-clap expresses what words can't. It is "Just this" with no intermediary: the sound of traffic, the smell of dinner, the boredom at work. It's all IT. CLAP!

Posted by Unknown at 9:39 AM No comments:

The perennial question in Zen is, "Who am I?" Until we answer that question and realized our true nature, we will be caught in Samsara's tangled web of suffering. In Korean Seon, we ask the question, "Who am I?", called a huatou. In this talk, Doshim discusses the importance of penetrating to the heart of "the Great Matter," as the Zen ancestors called it.

May we all awaken together.

Please Step out of the Vehicle 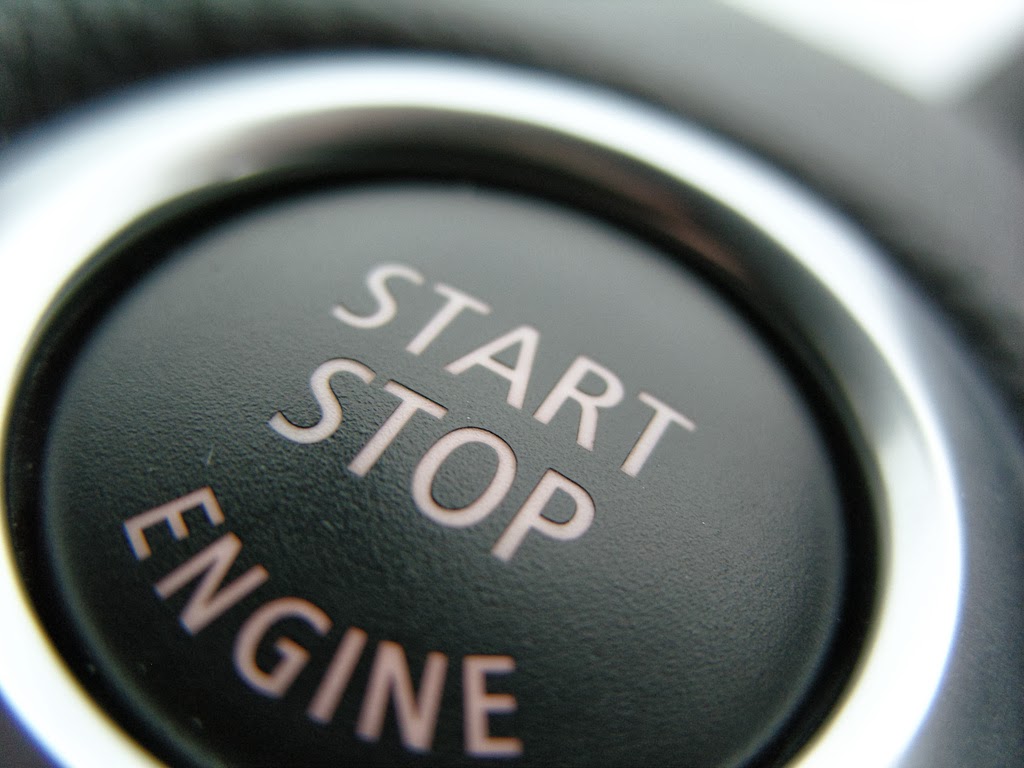 I have never understood why some Buddhists feel so strongly about what constitutes authentic lineages, traditions, and teachings. I suppose that I am very liberal when it comes to defining these terms, and lean more towards inclusivity than exclusivity.

Not everyone would agree.

Several days ago I joined a Zen group online, and upon being accepted by the moderator into the group, was immediately accosted by a member who accused me of hailing from a fraudulent Zen lineage. Normally I stay away from direct conflict, especially on the web, but I decided to try to reason with the fellow.

My mistake. Without rehashing all of the unsavory details, the man continued a many-post litany against me and the Zen order of which I am a member.

This was a rude awakening for me, which reinforced a very important lesson: Buddhism and Buddhists are just as prone to attachment, dogma, prejudice, ignorance, and being judgmental, as anyone else in the world. Being a Buddhist doesn't make someone immune to it; just look at Myanmar and the violence that Buddhist monks subject Muslims to daily.

I like to think of Buddhism using the traditional term, "vehicle." A vehicle is a device used to transport people. That's it's job, just like Buddhism's job is to wake people up--to metaphorically transport them from delusion to enlightenment. But somewhere along the line, as Buddhism grew and and became institutionalized, it became an end unto itself.

In other words, in some instances Buddhism got sidetracked and stopped being interested in Awakening and more concerned with maintaining and perpetuating itself. This is a major theme in my book, Brand-Name Zen (ahem, shameless self-promotion), and one that has long lingered in the back of my mind.

The danger in this tendency is that it invites legislative definitions of Buddhism. This is basically where one group thinks that it has the right to determine what is Buddhism and what isn't. Although it might seem like a stretch, but this was part of Japan's motivation for W.W.II.--to convert the world to Japan's superior culture and religion.

This is what I encountered on the online forum--one person who thought that his version of Buddhism was better than someone else's. He used lineage, tradition, and customs as firepower to discredit what he perceived as a spurious and tainted form of Buddhism.

It's in my nature to question authority, power structures, and tradition; this goes back to my adolescence and my "heavy metal days." So I fit right in at the Five Mountain Zen Order, where eclecticism and variety are celebrated and encouraged. With that said, I am very suspicious of tradition-for-tradition's-sake.

In my opinion, properly understood, Buddhism is a vehicle for Enlightenment. This does not preclude us from participating in devotional, or any form of spiritual, practice; in fact, it frees us to do it. However, the human mind is a tricky thing and will quickly objectify anything, including Buddhism.

As I was reminded of this week, Buddhism can very easily become jingoistic, antagonistic, and even violent. At times like these, I find it very helpful to take a step back from our practice and question our motives. Are we chanting, meditating, or prostrating to awaken and help other beings or because that's what we do? We can apply the same litmus test to any practice:

Why do we do what we do? Are we practicing to awaken or just maintaining orthodoxy?

I encourage us all to ask this periodically. In the famous words of the Buddha:


[D]on't go by reports, by legends, by traditions, by scripture, by logical conjecture, by inference, by analogies, by agreement through pondering views, by probability, or by the thought, 'This contemplative is our teacher.' When you know for yourselves that, 'These qualities are unskillful; these qualities are blameworthy; these qualities are criticized by the wise; these qualities, when adopted & carried out, lead to harm & to suffering' — then you should abandon them. 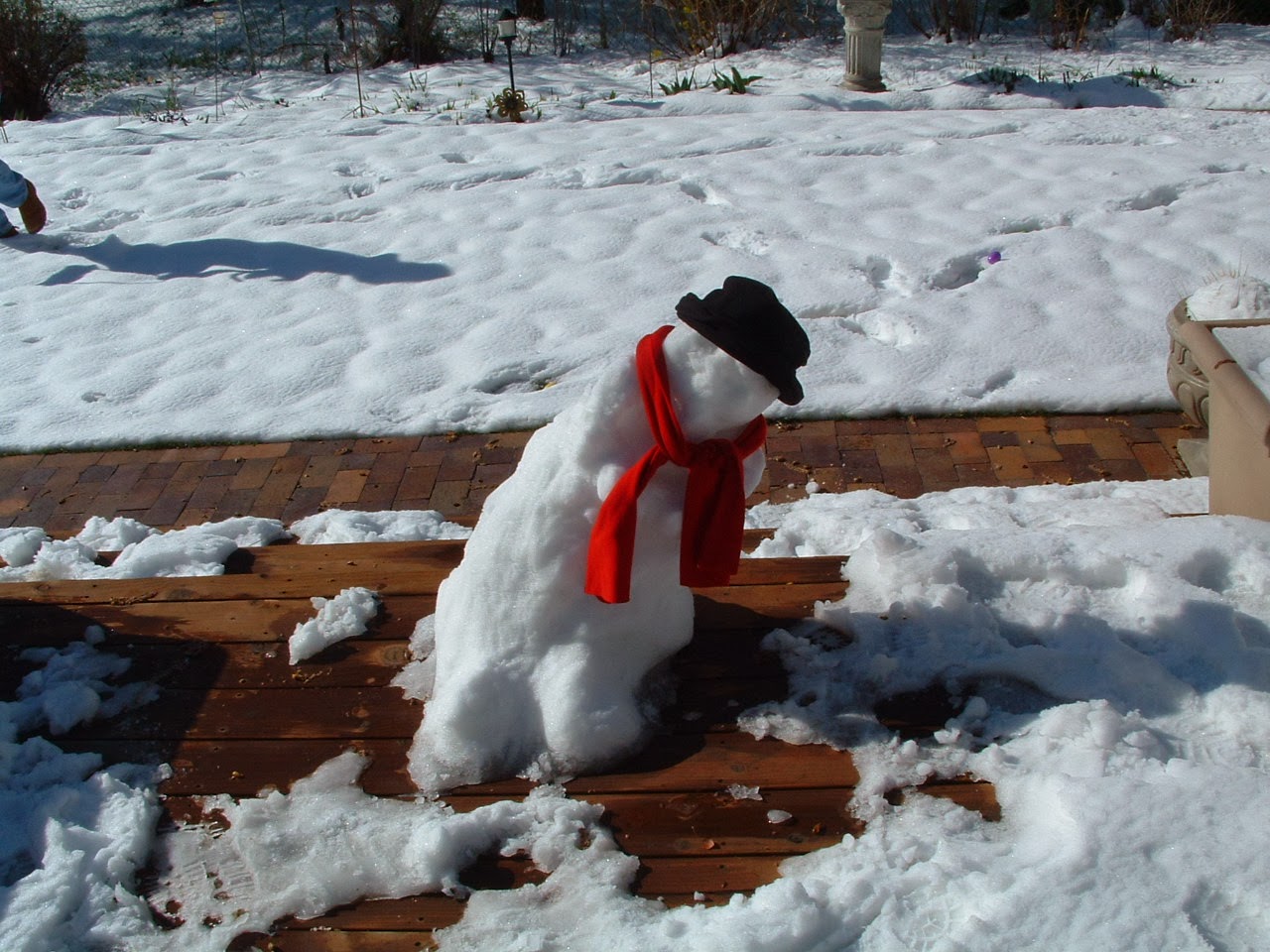 In the past month, the temperature in NJ has ranged from arctic (-9 F) to spring-like (in the 50s). We, like much of the country, have been blasted with some heavy snow, only to have unseasonably warm temperatures follow only days later. This has allowed me to observe one of the coolest--pardon the pun--winter phenomenon in fast-forward: the creation and melting of the suburban snowman.

Building a snowman is like designing a Tibetan sand mandala. We put all of this creative energy into rolling, lifting, shaping, sculpting, and finally dressing this human simulacrum, knowing full well that it is only going to melt away. Tibetans spend countless hours fastidiously designing intricate mandalas--miniature representations of the universe--only to blow the sand away when they are done. 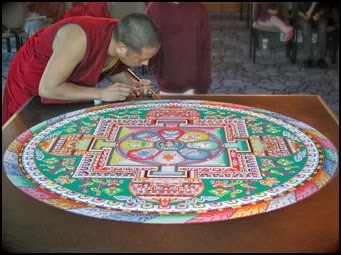 Both are celebrations of impermanence, and I think of life itself. In Zen, we say that we eat to eat, sleep just to sleep, with no intent of a reward or payoff. The same can be seen in the snowman. We build it, not under the illusion that it will be some timeless memorial to our efforts like the Mona Lisa, but precisely because it will soon melt.

We do it for the joy of it. The snowman, like the human it mimics, deteriorates rapidly, which makes it all the more marvelous. The trick to Zen is learning how to carry that joy of snowman building--or knitting, writing, exercising, drawing, meditating, or whatever brings us peace--into the rest of our lives.

Now that is true art.

Posted by Unknown at 4:55 PM No comments:

Email ThisBlogThis!Share to TwitterShare to FacebookShare to Pinterest
Labels: impermanence

On January 1st, many people declare that they are going to make a change in their lives, when in actuality they are really just going to continue the same rote patterns and habits they always follow. This is Samsara, a revolving door where we are constantly moving but really never going anywhere.

The same applies to Zen practice--we run around in circles. Einstein famously said that we cannot solve a problem on the level that it occurs; in order to enact true change, we must solve the problem from the next, higher level. In Zen, that means that if your practice abides in the relative, then your practice will always remain there. In order to transcend the relative, with its attendant suffering, our practice must occur in the Absolute. That's what this week's Dharma talk is about.

No way in or out 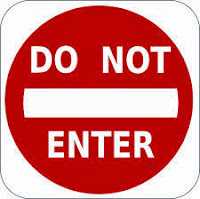 Here is an idea that has been rattling around in my head for a while:

I teach high school English, and by far the most challenging part of speech my students have understanding is prepositions. You know, those "in, of, with, by, about, above" words. I like to explain prepositions as words that express relationships primarily between nouns.

The tricky thing about language is its way of fooling us into believing that it corresponds to reality in some way. Even that last sentence (the whole part about language tricking us, as if language were an entity capable of action), if we take it too literally, can be misleading.

As an English teacher, I appreciate language; however, Zen, and my koan practice in particular, has revealed how transparent language can be. The challenge of seeing through language's slippery sleight of hand is our un-examined reliance upon it.

Nouns take a lot of criticism from Buddhists who argue that the impermanent world is a process, much more akin to verbs than nouns. However, that's still subscribing to language as if it could somehow mirror reality, which it can't.

Prepositions, in my opinion, are the trickiest. Viewing the self as a process is no more liberating or helpful than viewing it as a noun. For humans have a nagging intuition that we are "inside" our bodies looking "out" at the world. Regardless of whether we conceive of ourselves as a matrix of fluctuating processes or a solid subject, both fall into the trap of believing in and "inside" and "outside." This is a classic case of dualism.

It's funny to think how two little words--"in" and "out"--can cause so much confusion. Simply put, there is no me "inside" my body looking out at the world "out" there. Not because "we" aren't separate from "the world," which is just another, albeit more sophisticated way of continuing that same dualism of self and other, but we are world. Or we and the world are the same. Or...

See how tricky language can be?!

When "in" and "out" are seen to be transparent, then the whole dualistic enterprise collapses, for an "I" or self-hood loses all meaning unless there is an "other" or world to stand in contradistinction to it.

But I prattle. Words only breed more words. Use them but don't be used by them.

Enjoy your afternoon. If the weather permits, go outside for a walk, knowing full well that there is no "in-" or "outside."
Posted by Unknown at 3:17 PM 2 comments: