Sangha-ism: (noun) an over-zealous interest in the trivial affairs of the Buddhist community.

That's the word that comes to mind when I think of Western Buddhism. I still remember my disappointment that I felt when I received my first copy of Tricycle. It turned out to be yet another celebrity magazine; the only difference was that it promoted Buddhist celebrities instead of Hollywood ones.

That's the state of Buddhism today, just as commercial as any other mainstream industry or subculture. And sangha-ism is simply one of its most current manifestations.

Especially with the aid of the internet, many Buddhists have become disturbingly obsessed with the trivial details of the extended Buddhist "community." At the press of a button, we can browse the resumes of thousands of Buddhist masters, cataloging their experience, Dharma pedigree, teaching authorization status, teachers, Dharma heirs. You name it; it's all available, like gossip magazine stats for teen celebrities.

And there is a huge difference between studying Buddhism and being indoctrinated into the folds of its celebrity-Lama-Roshi obsession. The former is moderate, light, and selfless; the latter excessive, serious, and self-conscious/obsessed.

That is what I mean when I write "sangha-ism." After all, why the hell should we care about celebrity-Buddhist quarrels or attending a retreat with master-so-and-so?

Buddhism, in my opinion, has become a subculture, a lifestyle niche that many Westerners trade their "regular" lives for. Now they are "Buddhists," with all that that entails--subscriptions to Buddhist magazines and mailing lists, the latest down-low on all of the Buddhist heavy hitters, frequent visits to Buddhist gossip sites, and on and on.

There is no end to this post because this phenomena is endless. As long as print and digital media feed this celebrity- and lifestyle-obsession culture, there will be people who buy it.

There are many different forms of Buddhism out there--Theravada, Zen, Ch'an, Seon, Thien, Vajrayana. But all of them, I am confident, would agree that the moment we begin to think about Buddhism the same way that someone does who is obsessed with sports, then we are in too deep. At that point, we probably need to take a few step backwards and make non-involvement our practice. Practice disengagement.

I make no apologies nor excuses for my disillusionment with the Western Buddhist cultural machine. I am wary of institutions; I have always been, and probably always will be. Buddhism is no exception.

There's a subtle (or sometimes not-so-subtle) transformation that occurs inside of people's minds when they begin to think of themselves as Buddhists. I can't help but think that when people begin to identify their identities with Buddhism or as Buddhists, they are building a well next to the river.

There's simply no need for it. As the Buddha famously announced on his deathbed, "Be a lamp unto yourselves. Let the Dharma be your guide."

We don't need celebrity Buddhists; the teachings and practice are enough. By all means, join a local sangha, but be cautious of hopping on the Buddhist culture train.

Next stop, Sanghaville. All aboard!

You are NOT what you are looking for--Dharma talk

You are NOT what you are looking for. What most people are looking for--some notion of an ideal self as perfection or a spirit of some sort--is an idea, not a reality. When seekers are told that they ARE what they are looking for, their conviction about this self-concept solidifies further. Since striving, in the form of internal strife, is part of the very problem that seekers are trying to escape, all conceptions of self and seeker must be seen for what they actually are--mere ideas. Then both seeker and sought evaporate.

Posted by Unknown at 9:28 AM No comments: 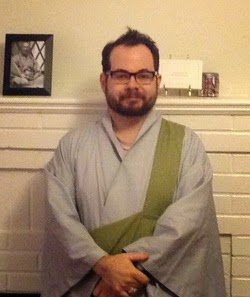 Beyond Non-duality (Part 2) - A Dharma talk

In this talk, the second of a two-part series, I address the common Mahayana interpretation of Enlightenment--insight into Emptiness and nonduality. I encourage you to look beyond the realm of all conditionality, beyond even nonduality, to the unconditioned Absolute.

Posted by Unknown at 7:28 AM No comments: