Emptiness or sunyata is often viewed as an absolute statement about reality, as in "All phenomena are empty of self." In this Dharma talk, I offer an alternative approach. Instead of emptiness being a statement, it can be understood as an instruction: "Empty yourself" and "empty your concepts about..." This approach emphasizes the continuous relinquishing of our attachments to concepts rather than creating another concept about emptiness itself. 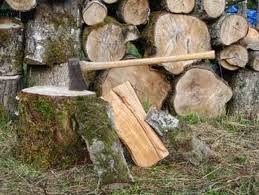 Like most of the Northeastern U.S., New Jersey is currently a frozen block of ice right now. My household is scrambling for firewood to heat our downstairs, and consequently, most of our house. We have a couple of log rounds in the backyard that a friend graciously gave us so I set to chopping them.

I'm in decent physical condition--been better, but I've been in worse shape too--yet there are few activities as demanding for me as splitting wood with an axe. I'm fairly large, over 200 lbs, so I get winded pretty quickly. Yet I love it!

Maybe it's Ch'an nostalgia filling my body--the romance of working outdoors like the old Masters whose maxim was, "No work, no food"--but there is an exhilaration to chopping one's own wood, knowing that soon the wood will heat my home.

After half a dozen heavy swings, I find myself leaning against the house, panting. There is no "I" at moments like these, only...pantpantpant!

The whole world is one giant, panting, frozen lung.

Then I'm back at it, hefting the clumsy maul over my head. Wood splits and my arms grow heavy. Sweat fills my hat and my glasses steam up.

Many times Zen practice does not take place in the Dharma room or on the cushion. Just swinging the axe, lugging the triangles of wood, that is life as it is.

No "I" is necessary. Losing ourselves in our lives, what more we can ask? Paradoxically, I feel most alive when there's no "I" present.

Eventually Zen must transcend Zen.
Posted by Unknown at 12:23 PM No comments:

In this Dharma talk, Andrew Hyeonjeong discusses how to accept the ubiquity of impermanence and the certainty of death.


"To Be or Not To Be is NOT the Question"

Ordinary people see the world in terms of "things," which causes them a lot of suffering because "things" inevitably oppose other things. They are rife with conflict. Zen shifts the question of "What (thing) am I?" to "How do I want to live?" In this talk, Doshim explores skillful living through Zen practice.

Posted by Unknown at 5:08 PM No comments: 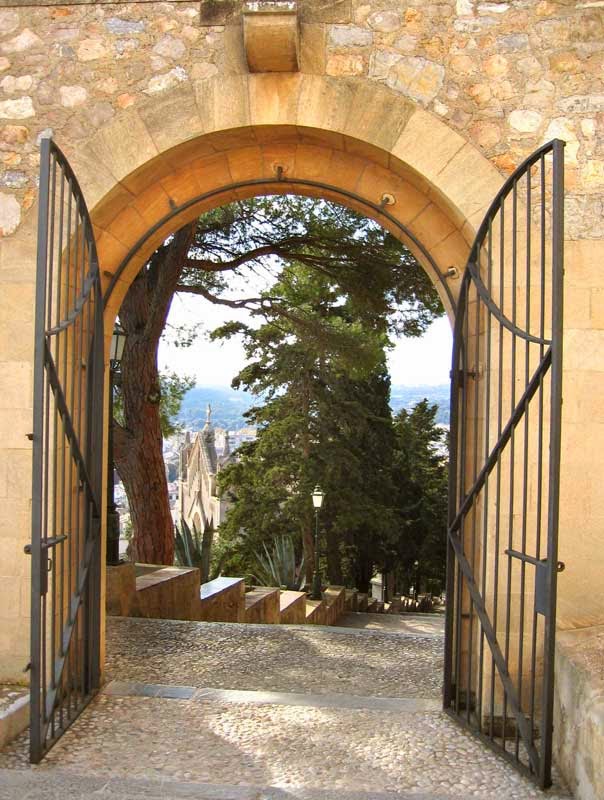 My kids and I were upstairs this morning eating breakfast when our puppy started whining. We have a gate at the bottom of the stairs to keep him from climbing up on his own, which he does every five minutes without the gate. So I climbed down the stairs and removed the gate and went back upstairs, expecting him to follow me up.

But he didn't. He just kept whining.

So we called him, but he still didn't come upstairs. He just kept whining, staring at the space where the gate had been moments ago.

He was so accustomed to the gate that he wouldn't climb.

The same thing applies to us. We impose barriers upon ourselves so often on--stories about who we are, our limitations, the world, how things should be--that when we get a glimpse of the world without them, we can't recognize it. We think that these constructions have a permanent, absolute reality to them, when of course they don't.

In The Shawshank Redemption, Morgan Freeman calls it "institutionalization." We get so accustomed to the bars that we come to rely upon them. I know that this sounds crazy, but our suffering can become a source of comfort, something reliable in what otherwise appears to be a crazy, uncertain world.

Yet they are only mental barriers that we are imposing on ourselves, and Zen practice aims at seeing through them.

The Great Way is wide open; there are no barriers. We are always free, even when we feel the most bound. What's extremely challenging is allowing those old propensities to subside, and to accept our free and open true nature.

Those old tendencies--call them habits, karma, or neuroses--are so seductive that can convince us that they are us. That they are our true identity; that we are them.

But they are no more us, or we them, than the clouds are the sky. Don't be fooled by your thoughts or habits. There are no gates. There never were. 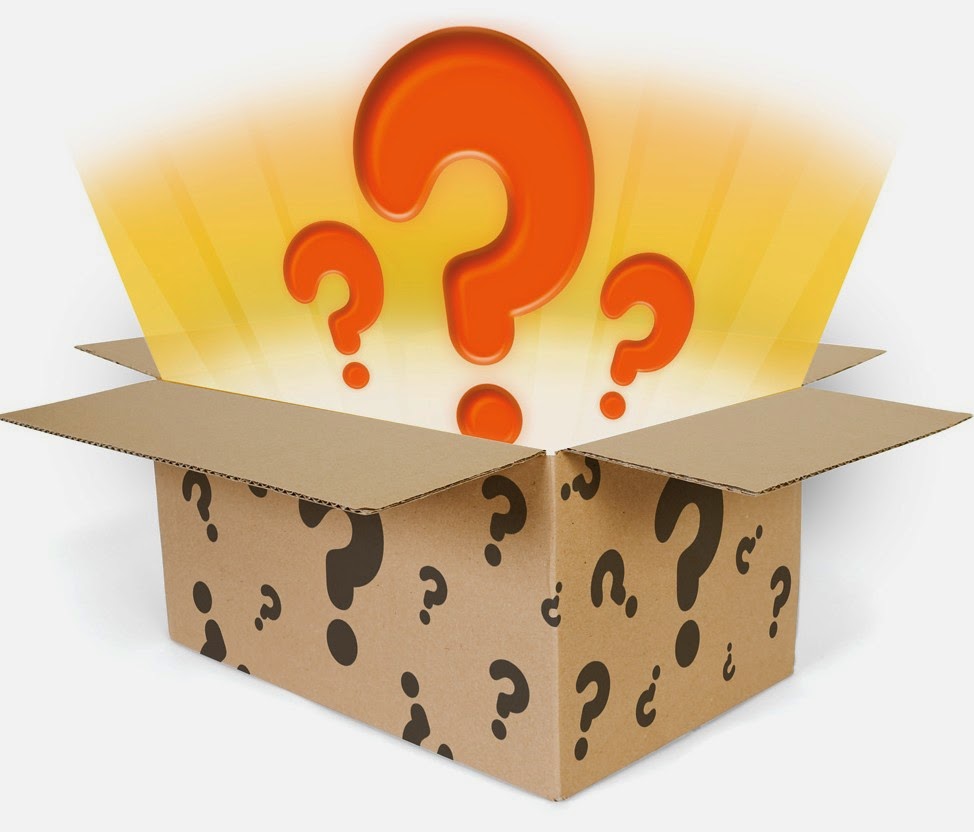 It's been real cold lately and my family has been hunkering down in our family room next to the fireplace. My kids vacillate between reading, drawing, playing with our new puppy, and watching a show called Good Luck Charlie. If you haven't seen it, GLC is very well done, about a wacky family named the Duncans.

When it's on, I can't help but watch because the characters are so well drawn and the story lines are so funny. This morning there was an episode on where Gabe, the middle child--a devilish, yet lovable little monster--is obsessing over winning one of those arcade claw games. His goal is the mythical Mystery Box, whose contents are...well, legendary. Rumor has it that some kid won one and found a mp3 player inside.

Eventually Gabe spends all of his arcade tokens trying to win the box, and even gets his arm stuck in the prize slot.

It's the dream of the Mystery Box--its utter unknowability--that entices him. He can't let go of the dream to open it because his imagination keeps teasing him with the possibilities. Mp3 player? Gold necklace? Treasure map?

"It's probably just something silly, like a whistle," his dad cautions.

Good advice. The stuff of reality seldom lives up to the mythic proportions we assign things in our imaginations. We strive for the perfect job--becoming a writer perhaps--only to soon learn that it is a job like any other. All job have their ups and downs.

We strive for the perfect car, partner, body, only to learn that none of these things satisfy us. Sometimes we even leap from one spiritual practice to another, as if the "answer" is just around the next bend in the spiritual bazaar. It's all symptomatic of the same dilemma--our insistence that we lack something, and that we will only be whole when we find it "out there."

Yet, the only mystery that can satisfy us is the Great Mystery. The realization that we are complete and whole, lacking nothing.

Introspection, gazing inwards at the limitless space inside of ourselves, witnessing the endless mystery of our existence, that is the only practice that can leave us lastingly fulfilled. In Zen, we call that "Tracing back the radiance"--seeing our true nature. But we needn't practice Zen to get there. Zen is one path among many.

The process of inquiry is what's important, not what we call it or whose name is on the road.

Then everything is revealed to be the Mystery too!

I was outside last night with the dog and it was snowing--light, puffy snowflakes. I looked up at the sky and tried to catch some snow in my mouth. There was no profound dropping off of body and mind as sometimes is the case in Buddhist lore. Just the snow falling and my dog peeing.

But it was Just So. And that was good enough. Everything is the Mystery--snow, dog pee, and all.
Posted by Unknown at 12:24 PM No comments:

Puppy Mind, or What I Learned from Our New Puppy 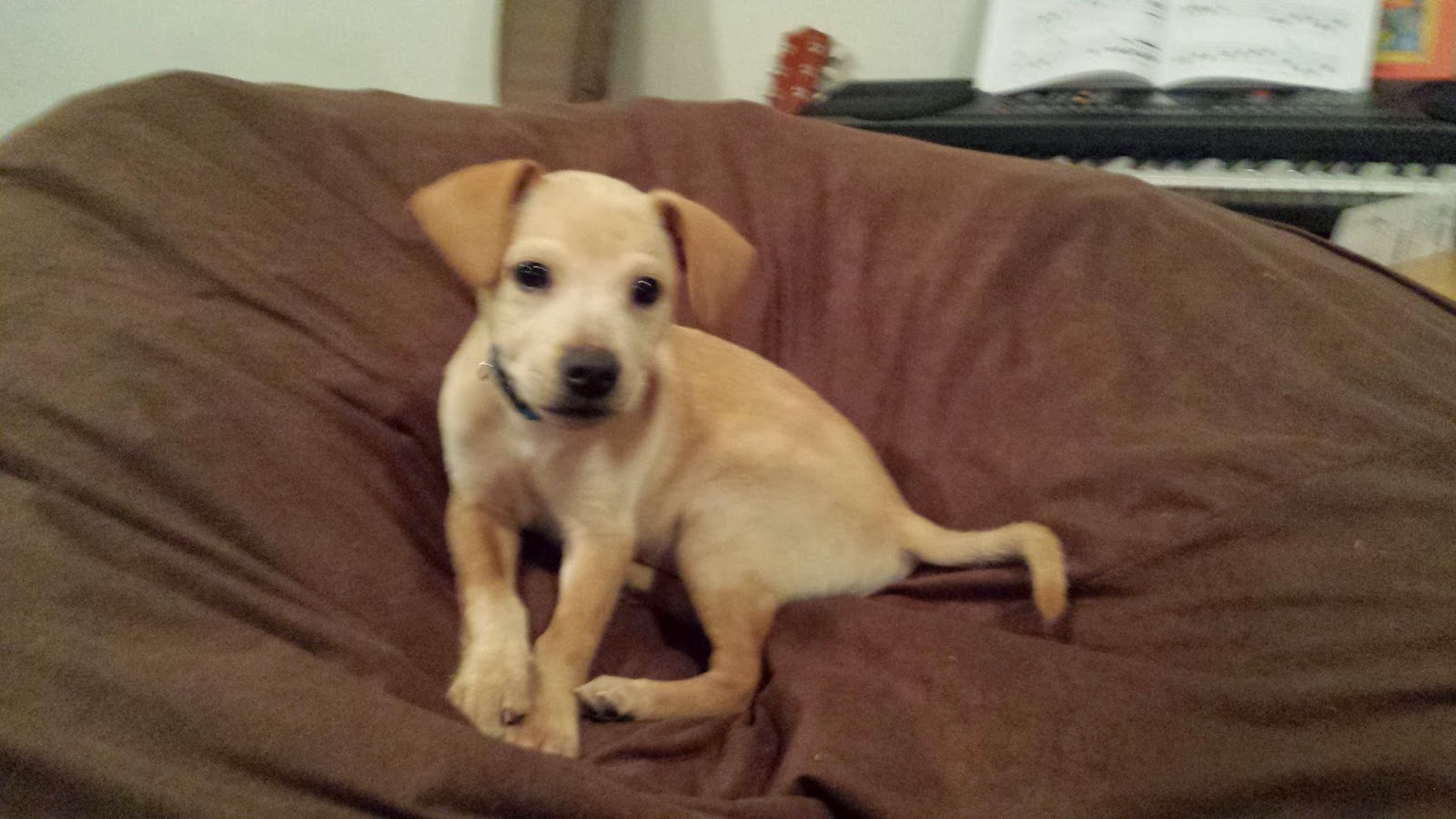 My family just got a dog; his name is Beau. As far as we can tell, since we adopted him from a rescue group, he's a Chihuahua Beagle mix. He's three months old and very friendly, but towards the end of the evening my children need a break from him so I take him into the meditation room with me to calm down a bit.

Oh how naive of me.

Since I don't bother to turn the heat on for the mere 30 minutes I plan to spend in the room, first I sit and wrap myself in a blanket. Beau immediately tries to eat the blanket and then I attempt to distract him with a chew toy or bone.

Candles burn on either side of the Buddha statue and I settle into the breath, while Beau explores the room. This proves difficult for me because he isn't completely housebroken, and so I am waiting for him to use the carpet as his personal toilet.

Eventually he whines to get out. On a good day, I calm him enough to have him sit in my lap by petting him and offering him his bone. Sometimes he falls asleep; sometimes he doesn't.

Try meditating with a puppy in your lap. It's not easy because he is so easily distracted. It reminds me of myself when I first began meditating.


Zen teachers call it monkey mind, but I think that puppy mind might be a more apt Western analogy. Our minds leap around like an unleashed puppy, investigating one thought after another, in search of the most satisfying or tantalizing one.

Sometimes the thought brings pleasure, while at other times it inflicts pain. You don't have to spend much time on the meditation mat to learn how much the human mind likes to torture itself with injurious thoughts.
Which leads us to another side of the puppy mind. While puppies' attention span is so short--they're engaged with you one minute and then chasing a squirrel then next--they can be incredibly persistent.

Anyone who has ever raised a puppy can attest to their surprising determination. If you don't want them inside of your laundry room, by God they are going to try every way they can to get in there--no matter how hard you try to distract them.

This is an aspect of the mind that we often overlook--the human capacity to fixate on one thing.


Once we get something in our sight, be it an idea or possession, the human inclination is to seize upon it. Sure, most minds are as fickle as a butterfly, flitting from one thought to another, but they also possess the fierce focus of a cat hunting a mouse.

All of these things have been unfolding in my meditation room, and thus inside my own mind, as I try to meditate with a puppy in my lap. Or off my lap as the case more often is.
Posted by Unknown at 6:29 PM No comments:

There's a Hole in My Robes! - Dharma talk

Life seldom plays by the rules, let alone 'our' rules. We're late on our first day of work; we miss an important job interview; we forget to fill our medicine prescriptions--life doesn't obey our commands. In a sense, Zen practice is about learning to embrace whatever comes our way, regardless of the circumstances. I came up with the title of this talk after my Zen robes split down the back. Better grab the needle the thread and start sewing!

Zen isn't about being passively peaceful in the face of difficult events, but about responding as skillfully as possible. It's about acting gracefully when you get caught in the rain without an umbrella.

Introduction and sound engineering by Tom Inzan Gartland.
Posted by Unknown at 3:30 PM No comments: