In this Dharma talk, I express my admiration for one of, in my opinion, the most important, yet least well known, Chan Masters in history. Guifeng Zongmi was the fifth patriarch in both the Heze school of Ch'an and the famous Huayen school of scholastic Chinese Buddhism. A fierce advocate of Buddha nature as the core of Buddhist practice, Zongmi is a continuous inspiration to me, and has had a huge impact on the direction of the Original Mind Zen Sangha where I teach. Many bows to the great Master, Guifeng Zongmi.

Not Two, Not One

It's very easy to misunderstand Zen or Advaita Vedanta and think that they advocate some sort of Super Subject that is separate from the universe that it "knows." This is not the case; primordial Awareness is not separate from the world of form.

Zen Masters have carefully avoided this lopsided Super Subject interpretation of the non-dual Mind through the expression, "Not Two, Not One." In this talk, I use the analogy of a TV- or computer screen to illustrate the relationship between the Knower/Knowing and the Known.

Posted by Unknown at 9:42 AM No comments:

Buddhas, what an eclectic bunch 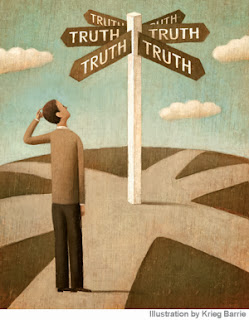 There are so many contemplative paths out there, each expressing its own perspective on truth, that it's almost impossible not to get bewildered by the inevitable question, Which one of them is right? Whether you're studying Vedanta, Zen, Vajrayana, Sufism, it's easy to either get didactic--My homies have the (only) real teachings; everyone else is just fooling themselves--or confused. For how can all of these apparently disparate teachings be correct? Self or no self, soul or no soul, God(s) or no God(s)? The fact that few agree on some pretty central points can be very frustrating.

That is, if you attach to the words.

As a Zen Buddhist, I frequently look to the source of the word "Buddhism" as a reminder not to get attached to words. Buddhism, by definition (or according to my definition, at least), is the teachings and path of an Awakened One, not just the historical Buddha. I view my Zen ancestors--Chinul, Mazu, Zongmi, Seung Sahn--as Buddhas. Therefore, I see no reason to devalue the teachings of an Enlightened teacher, like say Sri Ramana Maharshi, just because his teachings don't jive with Shakyamuni Buddha's. After all, there are plenty of "Buddhist" teachers who don't agree with one another, or who advance some unorthodox teachings.

Buddhism, under this rubric, is the teaching and path of any Awakened being. Granted, I'm being very liberal in my use of the term, but I think that this perspective allows us to be nourished by any and all of the great contemplative traditions. Not in some smorgasbord kind of way where we feel obligated to acknowledge every Tom-Dick-and-Harry under the sun who claims to be Enlightened. But in a broad-minded way that looks beyond the words of the teachings to the heart of the Enlightened mind itself.

There is, according to all of these traditions--regardless of whether they actually agree on how to interpret it--one Truth. Since it obviously and unanimously transcends words, it serves to reason that it also transcends any attempt at systematization.

So I don't but much stock in words or concepts, at least in their ability to communicate or distill the Absolute. This in no way prohibits our using of them, as I am right now; it simply reminds us that the relative world, including language and how we organize information, is culture-bound.

This means that even though these great teachers don't agree on how to interpret the Absolute (soul, no-soul; God, no God), their experience of it can still be fundamentally the same. So there's no need to dismiss or reject the profound teachings from other traditions simply because their paradigm doesn't fit ours. That's like biting off our nose to spite our face.

Personally, I love Papaji's teaching, and fully view him as a spiritual ancestor in the same way as I do Nagarjuna or Bodhidharma. An heir of Sri Ramana Maharshi, Papaji was a magnificent teacher with an amazingly warm presence that you can literally feel when you read him. I find his satsangs (public teachings) enormously inspiring and nourishing. Personally, I could care less that he is technically considered an Advaita Vedanta teacher, or that uses the words "Self" or "God."

That's completely besides the point. His teachings not only speak to me as a student, but have greatly influenced how I teach Zen. Because in the end, as I suggested earlier, I am a student of all Buddhas, not just the orthodox, canonized one(s).

Email ThisBlogThis!Share to TwitterShare to FacebookShare to Pinterest
Labels: Buddha

For centuries, Zen Masters have shouted, "Katz!", to startle their students into Awakening. In this talk, Doshim discusses the how we can use Katz! to reawaken ourselves in our daily lives.

No Pain, No Gain

"Nothing is free or has any value unless it is the product of labor." "If it isn't hard to achieve, it isn't worth it." These are the unstated beliefs underlying Western culture. And in respect to Buddha Nature and the contemplative path, they couldn't be any further away from the truth.

Waking up, as Doshim often teaches, is easy, as natural as waking up in the morning. It doesn't require any fierce labor or painful process. All it takes is awakening to your mind at this very moment; it's that simple. 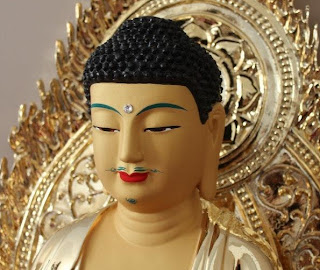 My favorite Buddha statues are those that depict Shakyamuni with a faint smile. No blank- or serious-faced effigy for me, I really appreciate the wry smile playing across my statues' faces, enticing us to awaken to the reality of Buddhahood. If you ask me, Buddhist practice tends to be way too serious anyway.

What is he smiling about? I often wonder as a admire his countenance. That sly grin suggests that he knows something we don't; or rather, something we do know but have somehow forgotten or lost sight of.

So what is this thing we have forgotten? Our true face as Buddhas.

This reflects the Mahayana teaching of Original Enlightenment, which states that all beings are already enlightened. They need not go anywhere or do anything, besides of course realizing this quintessential paradox of the human condition. Nescience, ignorance, or delusion, is not our original nature; they are adventitious, and thus need not cause us any worry or distress.

No teaching has influenced my life or practice as singularly as the principle of Buddha Nature. Far from some abstract idea, I see Buddha Nature as absolutely relevant and accessible at this very moment.

Who and what were essentially are is Buddha.

Zen Master Seung Sahn's envisioned Buddhist practice as a circle, where the beginning and end point overlap. We end where we began, changed, transformed, and yet fundamentally the same. For all we have done is awakened to our universal nature that was present from the very beginning!

For me, there is no more important teaching than this. It's the Buddhist Gospel, the Good Word of Enlightenment.

That's what the Buddha's smile says to me. Come on, guys. What's all the fuss? Why are you fooling yourselves into believing you are deluded? Just wake up and recognize the game you're playing. We both know what you're doing.

When we think of it this way, as a kind of cosmic game of hide and seek with ourselves (what is called lila in Hinduism), then we can't help but let out a full-bellied bellow of laughter.

Come to think of it, that would make a good koan: Why is the Buddha on the altar smiling?

The above photo is of the Buddha on my home altar.

Contemplative practice can often feel like a cosmic knock-knock joke as we seek to find ourselves. But how is that possible if we are the very thing we are seeking! In this talk Doshim tries to make sense of this Zen paradox by revealing that the search itself is rooted in the very dualism we are trying to transcend.