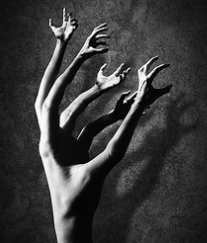 Sometimes I wonder whether I'm the greediest person in the world. If Lex Luther's weakness is the pursuit of power, mine is books. Buying books is like a hit of speed for me. Okay, maybe not speed, but it does provide a temporary rush or thrill. The second I see or read about a title or author I don't have on my shelves, I'm immediately seized by the need to own it (imagine a book in every hand in the picture above). And I mean seized--it's almost a physical imperative. My heart beats faster, the muscles in my stomach and chest tighten. I swear, it feels like I'm turning into a werewolf! And the craving is insatiable, for any satisfaction I gain is short-lived. Soon the buzz wears off and I move on to another title. And hence the cycle begins all over again.

As a Buddhist, I'm fully aware that this is not only craving/grasping, but also the cause of suffering. And the fact that all of the books are Buddhist (talk about irony!) only adds insult to injury. On the other hand, Buddhism does offer a practice to break this cycle: mindfulness. When these moments of greed (for that's what it is: an intense, irrational need to possess something) grip me, I try my best to stay mindful of them. To follow the breath and pay attention to the bodily sensations--the muscular constriction, increased blood pressure, intensified breathing. Soon it passes, almost like a panic attack or anxiety spell would.

After engaging these symptoms, I decided to explore them on the cushion. Here's what I do:

First off, my mind is like a carousel: rarely does a new thought pop up. It's just the same thoughts spinning around and around, waiting for their chance to steal the spotlight. Often they're about my family, books, this blog, or Buddhist practice. Inevitably, as I'm swept away on some fantasy, sooner or later I'll feel that familiar tug of greed in my chest. That's when mindfulness pounces!

The object of this meditation is to trace the physical, mental, and emotional experience of greed (although it can be any strong negative emotion: jealousy, envy, anger, anxiety, etc.) as it arises and diminishes. So once I spot it, I follow it with my mind, kind of like a sniper would through his rifle scope. Really try to penetrate the physical aspect of greed. What does it feel like? In what body parts are the sensations most intense? How long does the episode last?

Emotions are intimately connected to the mind and the body; they're like a bridge between the two. So the next time an emotion arises, try to identify how it physically feels. See if you can trace the link between the physical sensations and the actual emotion. Is there a difference between the two? Try to attend to the tonal shades of each.

Now here's the fun part: once you've identified your emotional pressure point (the one that frequently traps you) and followed it at least once during meditation, play with it. In the same way as you tongued a loose tooth when you were a kid, lure that emotion out of its shell again. Tease it.

It's easier than it sounds. All you have to do is think about the trigger. For me, it's books. The second I start thinking about them, my mind will take off on its own, literally grasping at any avenue to purchase one like a child in a toy store on a spending spree. For you, it might be your relationship with your boss, spouse, parent, sibling; or maybe it's bills or your health. Whatever it is, find the trigger, engage it during meditation, and then give the emotion free reign. Let it do its worst.

Then study it. This time, pay close attention to how the emotion arises and diminishes. Repeat as often as you need to. What you'll find is that, the more attention you give the emotion, the less power it has over you. You'll begin to see it for what it is: a habitual thought with a physical response attached to it. Namely, an emotion; nothing more, nothing less. And from this comes freedom. Freedom to act and choose.

One thing to avoid is mentally engaging the emotion by entering into a dialogue with it. You're like an anthropologist here: just study, do not engage. This includes psychoanalyzing it. We're a very psychologically oriented culture, so this may be a natural impulse. Avoid it. You're not trying to understand the source of the emotion as much as its nature (what it feels like; what triggers it, etc.).

The next and final step is to transfer this practice into your daily life. The next time the emotion grips you off your cushion, study it--experience it fully. See it for what it is: a transient, physical sensation. Soon it will fade away. This is the goal of the meditation. For the more frequently you watch the emotion pass, the more freedom you will find you have.

Don't, however, expect the emotion to disappear permanently; it won't. Inevitably, it will return. But with enough practice, it will begin to lose its hold on you. It won't feel as demanding or like such an imperative anymore. The hand of grasping will open, leaving you with the power to choose. 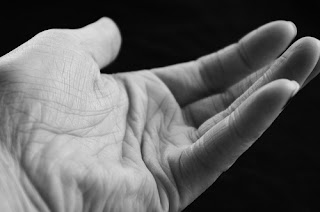 But you're not done. In fact, you never will be. Continue the process, engaging and exploring your emotions until you're no longer bound by them. Keep practicing....forever.