Beyond Doctrines and Dogma

Yesterday I had a conversation with a colleague about world religions. We were talking about depictions of God and how different religions view iconography. Then I mentioned to him the phrase, "Kill the Buddha!" and I thought that his face was going to fall off.

What the hell! his expression said. Kill the Buddha?

To the best of my knowledge, Zen is the only tradition that openly recognizes both its limitations and the fact that Zen itself needs to be transcended. Any and every concept of the Absolute must be immolated. Maybe it's this difference that makes me hesitate to label Zen a religion. (When it is properly practiced, I don't think that Zen is a religion, at least not in the same way that Christianity, Judaism, Islam, and mainstream Hinduism are. Beware the institution that exists for its own sake!)

This is very different than other spiritual traditions. While some religions renounce representing God with graven images, they fall into a much more subtle, insidious trap--they create an idea of God. And then they defend that idea, and sometimes kill for it.

Ont the other hand, no Buddhist idea is worth fighting over. Which is not to say that people don't fight over them; it's just that, properly understood, Buddhism is a tool, not a lifestyle or dogma.

Every idea must be recognized as a concept. Admittedly, some concepts are more helpful than others (such as washing your hands during the flu season), but all are merely bubbles floating in our minds--transient, insubstantial, yet sometimes dangerously seductive.

So kill the Buddha. Let go of all ideas and ideals about what you think an Enlightened person looks and acts like. Then act in accordance with what's in front of you.

The toilet's dirty? Clean it.

It's snowing outside my house right now. In a few hours when it stops, I will go outside and shovel. In the meantime I'll get a snack.

No God. No Buddha. Just a banana with a cup of coffee. And when that's done, let that go too. 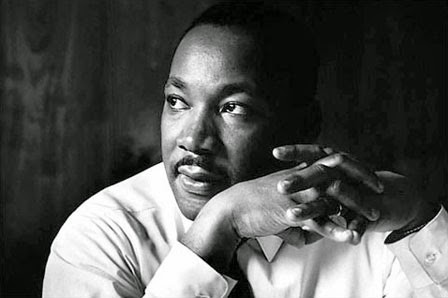 Many Americans will be enjoying tomorrow off for Martin Luther King Day. And well they should, for not only was Dr. King an advocate of civil rights, he was a champion of worker's right, too. In fact, the day before he was assassinated in Memphis, Dr. King delivered a speech to Memphis sanitation workers, encouraging them to fight for fair wages and benefits--a battle that is still occurring on a much broader scale in this country, as insurance premiums rise and workers are expected to contribute more every year.

This little-known fact demonstrates, to me at least, how full circle our nation has come in the past fifty-one years. Today, the labor movement in the United State, once thriving in the 1970s and '80s, is another glaring example of the diminution of the working class. As an advocate of organized labor and member of a union myself, I cannot help but be ashamed at how upset Dr. King would be about the systematic dismantling of two decades worth of progress in workers' rights. Not to mention the terrible racial plight this country still finds itself in.

On Fridays, many people wearily utter, "Thank God it's Friday." I smirk every time I hear this because a friend's reply always comes to my mind:


"Don't thank God. If he had it his way, we'd be working six days a week! Thank the unions."

Indeed. And thank you, Dr. King, for your bravery and commitment to actualizing the American Dream for all Americans--black, white, brown, Christian, Muslim, Jew, Hindu, Jain, Sikh, Buddhist, male, female, transgender, hetero- and homosexual, rich, and poor.
Posted by Unknown at 1:09 PM No comments:

Religion is just another thing to let go of

I don't consider Zen--or at least the Zen I practice--to be a religion. Religions entail beliefs and doctrines; I'm not interested in either of those. People argue, hurt, and sometimes kill one another over those issues.

Emptiness or impermanence can sometimes become arguing points for Buddhists, when they allow it calcify into a doctrine. But I don't view emptiness or impermanence as statements about reality as much injunctions to relinquish our attachment to things. In this light, it's not that things are empty; the Buddha is saying, "Empty yourself of your views about, and attachments to, things."

In other words, the Buddha taught impermanence because engaging life with impermanence in mind encourages us to let go and stop expecting unrealistic outcomes from reality.


Things change so let go of them.

Buddhism can then be understood to be a series of instructions: Do 'this' and 'this' and see if it works.

Religion, on the other hand, insists; it declares. It circumscribes and reifies. So I don't see Zen as having anything to do with religion. My head hurts right now--that's real. I directly experience that.

The fire burning in the fireplace at my side is hot. There is no room for God or even Buddha in this moment. It is already complete by itself.

No one argues or kills one another over the experiences that haiku point to: frogs leaping, the smell of horse manure, the crunch of snow underfoot.

Religions dig their toes in the doctrinal sand and say, "Well, according to so-and-so....and anyone who believes differently is wrong!"

I've never been fond of belief systems. We chant the Heart Sutra at the end of our evening practice as a reminder--Don't get attached to anything.

Least of all Buddhism. Let go of God, let go of Buddha. Any ideas we hold onto become our masters.

My head still hurts. The fire blazes even hotter.


(Insert Name Here) Does Not Exist

The "I" is the greatest fictional character that ever existed because people believe that it exists. In this Dharma talk, I discuss the illusion that we call "I" and how not to take it so seriously.

Posted by Unknown at 9:31 AM No comments:

Go Back the Way You Came - Dharma talk

Happy New Year! Here is a Dharma talk for your listening pleasure.


Go Back the Way You Came

Sri Ramana Maharshi, an awakened Hindu sage, uttered this title to a disciple as instruction for realizing one's original nature. In Zen, this practice of self-inquiry is called "Tracing Back the Radiance," and is central to the practice at Original Mind Zen Sangha.

Posted by Unknown at 4:12 PM No comments: