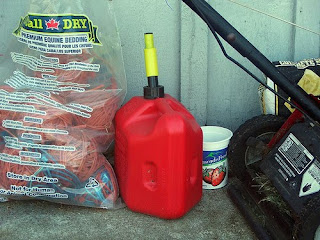 The last thing you want to hear your spouse say at 5:45 in the morning, while you're eating a bowl of Frosted Flakes, is, "Do you smell gasoline?"


At first, I shrugged it off and kept eating. My wife has this habit of smelling odors that aren't there, hearing intruders in the middle of the night who don't exist. So I wasn't too concerned.

Until I followed her into the basement and the smell was undeniable. There was gasoline somewhere.

We searched the basement, but couldn't locate the smell. It was strongest near the left wall, the one closest to the garage.

"Do you think it's coming from the garage?" my wife asked.

I sighed. Great, just what I wanted to be doing before 6 AM: searching for leaking gas in my garage.

I drank the rest of my cereal milk and we went outside.

Now a couple of months ago, when Hurricane Irene struck, my wife and I bought a back-up generator. We hadn't needed it, thank goodness, but when we opened the garage, there it was leaoking over the garage floor.

Talk about irony--here we bought it to solve one problem and now it was causing another one! Tyler Durden nailed it when he said, "The things you own, wind up owning you."

So we poured sand over the gas and placed a container beneath the leak. Luckily it was very slow--just a drop every few seconds. If I was lucky, maybe it wouldn't overflow before I got home from work. (I know someone is cringing at this right now.)

I don't know if I handled the situation as responsibly as I could have--I had to get to work, be in the classroom teaching by 7:30. But I wasn't as rattled as I normally would have been. Strangely I felt like this was just another event, admittedly inconvenient, but not as much of a problem as it normally would have felt like.

It was what it was: leaking gasoline in my garage. There was no use adding to the situation. That's what I have been learning from Zen: don't add anything. I'm a pro at that, complicating situation with all sorts of extra baggage--emotions, thoughts, you name it.

But now, standing in the garage, barefoot and in my boxer shorts, I felt an openness. I didn't have to freak out. I had a choice.

Thanks to all the ancestors for giving that to me.

Yesterday was sesshin. I couldn't attend; my home life is way too hectic for me to leave for 10 hours on a Saturday. Coincidentally, my son was running a very high fever on Friday and my wife and I were up most of the night soothing him, so I couldn't have attended anyway.

Normally when family obligations "got in the way" of a retreat, I would mope around, thinking of all the good sitting I was missing. Talk about backwards--while I was at home, I was dreaming about how mindful I would be at the zendo! Helllllllo, wake up pal! You can be mindful anywhere; you don't need to be at the zendo to do it.

Yesterday was different, though. I knew that my place--even with my son's fever aside--was with my family. They need me now, and I genuinely want to be there for them. Not out of some paternal duty; I want to help them any way I can: changing a diaper, giving a bath, brewing yet another pot of coffee.

That was my practice yesterday--being a dad, a husband, a sleepy guy who was up half the night. Not "supporting my family," but being a part of it.

The whole time I tried my best to stay mindful--especially when my nerves were splintered from exhaustion--maintaining awareness of my body, mind, and speech. It was an ordinary day, nothing special. I didn't have any profound insights, but then again, I don't think Zen is about inducing some special experience. Sure there's kensho, but lately, through koan practice, I've been more concerned with fully engaging my life than with having some transcendental, non-dual experience.

Practice is portable; you can take it anywhere with you. In fact, I would argue that that's what genuine practice really is--wherever you are at this present moment. What's going on right now? What's your mind up to?

So I didn't get to sit sesshin, maybe next month. Maybe not. But what I did get was a chance to hold my son while he was crying, when he needed me the most. I felt what it was like to be exhausted, frustrated, and confused at 4 AM. That's what life was like at the moment. And I sat with it, in the midst of all that emotional chaos.

It was great practice.
Posted by Unknown at 3:06 PM 2 comments: 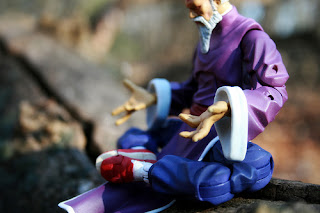 You may have noticed a theme running through my last several posts concerning practice. Lately, I have started reexamining how attached I am to practice, especially zazen. If Zen is the practice of complete non-abiding, requiring the relinquishment of all attachments, then doesn't it serve to reason that we should let go of Zen too? For as I have found, Zen, namely zazen, can become a form of attachment.


We hear more about this regarding koans, where teachers caution their students against attaching to koans, since they are merely a raft to carry us to the other shore. Like the Buddha's teachings, they are upaya, skillful means.

But we seldom hear that said about zazen; instead, meditation, especially in Soto Zen, is regarded as the holiest of holies.

It almost feels anathema to imply that zazen can turn into a form of attachment, but try skipping 0ne day of meditation and you will soon realize how attached you are to the practice. Shame, guilt, anxiety commonly accompany a missed zazen session of mine.

Zen has been described as a thorn to remove the thorn of suffering. But the problem is that most people forget to remove the second thorn! The purpose of Zen, or Buddhism in general, is not to exchange one set of bad habits for another set of good ones.

Zen is not self-improvement. It's a path to Wake up.

So, lately I have been studying my attachment to and motives for practicing. What is it that I expect from zazen? Sure I know that we're not supposed to expect to gain anything from zazen, but why do we do it?

Dogen says that sitting is what a Buddha does. But isn't that making zazen something special by elevating it above all of our other daily activities? In the true spirit of non-duality, how is zazen any more sacred than brushing your teeth? Shouldn't we be present during both?

Recently I have noticed how zazen holds a privileged station in my practice, and I wonder why.

Koans, or at least the way that I study them at Five Mountain Seminary with Rev. Lynch, transfer into my life. I feel like I carry them with me. But how about zazen? Have I been limiting myself by treating it as something special?

It feels like someone has kicked the stool out from under me. I'm falling. It's scary to feel the once solid ground of my practice quiver beneath me.

But I suppose this is yet another phase in my practice--removing the second thorn, which at this point, has become indistinguishable from the first.

I'm reading a really cool fantasy book, The Darkness That Comes Before by Canadian author R. Scott Bakker. There was this great quote that I wanted to share, but I can't find it. Basically it said that asking questions is like opium; the more we ask, the most questions arise. The wise person, on the other hands, accepts the mystery of life.

Instantly I thought of the Zen "Don't know" mind, the mind freed from the duality of concepts. Who am I? Don't know. What is this in front of me? Don't know.

I find myself asking this more and more often lately. When I'm walking down the school hallway, before the students arrive--What is this? And honestly, I don't know. There's just this...no need to label or define it. Like Ram Dass said, just be here.

It's that ability to accept Don't know, without trying to force life, people, or situations into rigid categories, that Bakker is writing about. The ability just to accept the present moment without cutting it up into a mental grid or imposing our expectations onto it. Just let the moment unfold.

What is this? Don't know.

Because we've let go of the need to know. That's where I am in my practice right now. It's definitely influenced by Seung Sahn's teachings and especially my teachers in the Five Mountain Monastery.

Thanks everyone.
Posted by Unknown at 8:43 PM No comments: 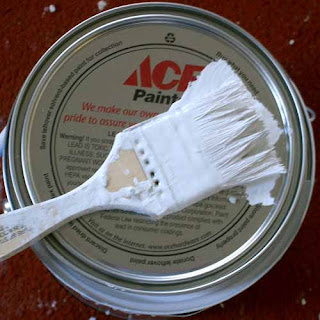 Painting and I don't get along. I'm messy, impatient, and have no depth perception whatsoever. So when it comes time to paint a room in our house, the task usually falls onto my wife's shoulders. This past summer, we had our screened-in porch converted to a three-season room, and like all new constructions, it needed to be painted.

My wife and I--public school teachers--had off from school on Thursday and Friday for Rosh Hashanah. Our plan was to paint on Friday while the kids were at school and then relax the rest of the day.


What began as a three-hour priject turned into six, and then eight, and then eventually spilled over into the double digits.


But here's the thing: I didn't mind painting at all. Normally I would be huffing and puffing, cursing under my breath the entire time; but not on Friday. Or Saturday, for that matter. I was, to use sports terms, in the zone.


Hours passed and I didn't even notice. I was so immersed in the activity of painting that I didn't think of any else. In fact, I didn't think of anything. Ordinarily, while I'm doing something fairly rote like mowing the lawn, I will inevitably drift off into thought--planning, narrating, daydreaming, etc. But not this time.


I was so intent on painting, paying close attention to every detail and movement of the brush, that I completely lost myself in the activity. It probably had to do with the fact that I'm an unskilled painter, so I had to concentrate the entire time. But either way, it was pretty amazing. I suppose this is how athletes feel on the field or on the court. The dropping off of body and mind.


Please don't tell my wife, though; I don't want to make a habit out of painting.


Now if I can only do that while grading essays, I'll be set!

Posted by Unknown at 2:01 PM No comments: