As a Brother and Sister - Dharma talk

The entire universe is one family. All beings are intimately connected--not just humans, but every plant, animal, insect, and atom. Compassion and wisdom mean treating all beings with the care, patience, and tenderness that we normally reserve for our closest loved ones.

The Earth Is My Witness 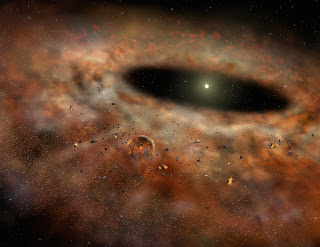 The earth was not created; it most likely formed from the accumulation of interstellar dust in a process called planetary accretion. I raise this, not to undermine the notion of creationism, but to point out creationism's most dangerous logical conclusion--that the earth was created for humans.

This fundamental error, endorsed by some of the world's most influential religions, has been the root of many of our ecological and moral crises--pollution, animal cruelty and exploitation, the decimation of endangered species, fracking, deforestation, and so on.

I wish that this were a massive exaggeration, but the United States is currently facing one of the greatest threats to the environment that it has seen in decades (if not ever). The Trump administration seeks to deregulate the EPA and its related protective legislature to promote business expansion. If modern industry is left unchecked to do as it pleases, the result of this could be disastrous.

And at the heart of this lies that fundamental error--that the world was created for humans to do with as they please. Whether Trump and his administration genuinely believe such a fallacy is irrelevant because millions of people do, and not just his constituents. I would wager that even those Americans who don't identify as being religious subscribe to this destructive myth.

Buddhism understands that humans are interconnected to everything else. While it is our habit to privilege humanity above other species or the planet as a whole, this tendency is not grounded in reality. Earth wasn't created for us; we are earth. We cannot exist without the soil, air, and food that grows. Humans--while an evolved species and a magnificent expression of life--do not live in a vacuum; inseparable from our environment, we are our environment. In the vast web of life, distinctions are arbitrary. There is no clear line demarcating where we begin and the earth ends.

We are an expression of that great unity called life, and as a conscious embodiment of it, we are responsible for how we treat the rest of the world. Because of developments in science and technology, humans have risen to become a dominant species on earth, but that does not make us the planet's rulers. Far from it, we are stewards at best.

We must learn to govern, live, and share this world responsibly. This begins with seeing clearly. I challenge--and encourage you to challenge--the destructive myth that animals were created for us to eat; that the earth was created as our playground. Nothing could be further from the truth, or more destructive.

Posted by Unknown at 9:51 AM No comments: 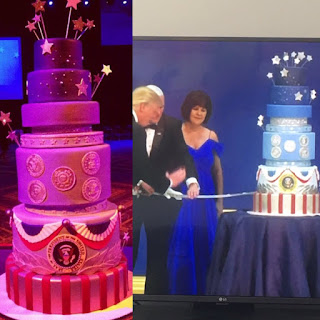 Donald Trump commissioned his inaugural cake to be identical to President Obama's cake from 2012. (See photo above: Obama's is on the left. Click here for the story.) While this may seem a bit strange, it's not what I find most fascinating about this bizarre story. As an English teacher deeply interested in literary symbolism, I was captivated by the fact that the cake was fake.


The cake is made of Styrofoam.

Only one portion of the cake--the part that is ceremoniously cut--is edible; the rest is a facade, just like our current president himself. More than a successful real estate mogul or casino owner, Trump is a brand. He has amassed much of his fortune based on his name, through licensing deals with golf courses and land development.

To paraphrase Shakespeare, what's in a brand? It is not land, natural resources, or gold. While extremely valuable, a brand is a formless phantasm. Like Trump himself, it lacks substance. Besides his mythical wall and a promised return to Reagan-era tax breaks for the wealthy, I can't identify any solid policy that Trump has proposed.

Because he hasn't proposed any. Trump got elected because of his ambiguity, not despite it. Like his shallow cake, he has no political platform other than a vague agenda to "make America great again," which is a campaign slogan, not legislation or policy.

Just as with so much of Trump, his Styrofoam cake is phony--a sugary veneer covering a sterile, unpalatable core. 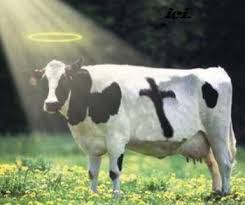 When I was watching the Presidential inauguration yesterday, I was struck by the sheer amount of times I head God (and Jesus) mentioned. Besides alienating groups of people not represented in or affirmed by the inauguration ceremony--Hindus, Muslims, Buddhists, atheists--I just didn't see why religion has any role in politics.

As a firm believer in the separation of church of state, I started thinking about why religion holds such an elevated status for people. I consider myself a reasonable person; I don't subscribe to views that empirical evidence or science cannot avouch. If I held a belief that was rationally untenable--like there were 10,000 Buddhas dancing on the tip of a needle--then I would re-assess my belief.


Religion should not be exempt from reason and logic. That's why I appreciate Buddhism so much; the Buddha encouraged thoughtful, skeptical inquiry.

Yet, religious view, no matter how preposterous, are considered sacrosanct. Why? Religion does not exists in its own unassailable sphere.

For instance, why are religious organization tax exempt? While this runs counter to the notion that most Americans have about religion--that it's somehow sacred in a way that playing tennis or playing
guitar aren't--I think that it's an important question that we need to ask, especially now that the religious right controls both the congressional and executive branches of our government.

In America, religion intrudes into politics all of the time, and it is considered perfectly acceptable, so much so that during the presidential debates, both candidates were asked how their faith influences their lives. Both Clinton and Trump gave the same stock reply, neither of which was acceptable in my opinion. I want a candidate who says, "My religion, or lack of religion, will have no influence on the laws I pass." I don't want my elected representatives' religious views meddling into policy.

Still, we see religion insinuating itself into conversations about marriage equality, birth control, and even sex ed. While the Constitution protects Americans' right to practice religion, I don't think that it should allow religion to intrude into the common public sphere. Treat religion like any other facet of society.

Posted by Unknown at 2:08 PM No comments:

Email ThisBlogThis!Share to TwitterShare to FacebookShare to Pinterest
Labels: Buddhism

Every day is brand new. Every day is an opportunity to awaken. Living with this in mind every moment is walking the Buddha's Way.

Posted by Unknown at 6:04 PM No comments:

The fundamental tenet of nearly every spiritual tradition is to do good; don't cause harm or inflict unnecessary suffering. Help others whenever possible. This all sounds good in theory but putting it into practice is another matter entirely.

In the modernized West, food of all varieties is available to people of all incomes, and yet Americans consume more meat than ever before in history--even though they know that animals are virtually tortured in the process. I don't understand this willful ignorance. I'll paraphrase Thich Nhat Hanh and say that a hamburger is pain. We support cruelty when we buy factory farmed meat.

Another example of the same principle: although many of the white Americans who voted for Donald Trump may not actually be racist, they are okay with racism. When Muslims or Mexicans are persecuted because of racist legislation that Trump passes, Trump voters are responsible for that injustice. They may pretend that they aren't or argue otherwise, but they are accomplices to racism and discrimination.

A large part of contemplative practice is about being honest--owning oneself and one's actions. If we endorse racist politicians, we are permitting racism. If we eat meat, we are a contributing to cruelty. Our actions and their consequences are our responsibility. If we poison the river, we are responsible for all of the harm that it causes--not just immediately, but generations from now as well.