What would the Buddha teach today? 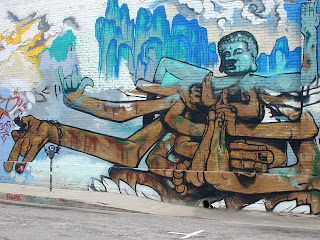 I just finished reading the Digha Nikaya, and was immediately struck by how stylistically different it is from Mahayana sutras I am familiar with. The Sutta Pitaka, of which the Digha Nikaya is a member, contains the Buddha's core teachings. The suttas are highly repetitive and often take the form of systematic lists, probably mnemonic tools to aid the monks and nuns in memorizing the often lengthy discourses.

All those lists and reoccurring passages got me to thinking: since this teaching style--suited to the Buddha's time (around 500 B.C.E), culture, geography--clearly would not be the best fit for 21st-century Westerners, how would the Buddha deliver the Dharma to us today? Upaya, or the teaching of skillful means, entails that the teacher use whatever tools will work best with his/her audience.

For example, the teachings of impermanence, dependent origination, no-self, and emptiness, are all expressions of the same fundamental principle; they're just different perspectives on the same truth. Thich Nhat Hanh, in the true spirit of upaya, teaches his Western students about emptiness using a positive form of expression he calls "interbeing."

So how would the Buddha deliver the Dharma to us? Not only what tropes or delivery style would he use, but more fundamentally, what teachings would he emphasize? For just as Buddhism has adapted to suit the needs of each culture it meets, thus stressing different aspects of the Dharma each time it manifests in a specific culture, we as westerners have entirely different needs and concerns than say, medieval India or feudal Japan.

So what would the Dharma look like if the Buddha delivered it for the first time ever in New York City, London, or Los Angeles? What form would it take? Would it resemble Bernie Glassman Roshi's Street Retreats, or something else? I don't doubt that the core teachings would be the same, but what aspects of the Dharma would the Buddha stress if he were a Westerner himself?
Posted by Unknown at 9:48 PM

Email ThisBlogThis!Share to TwitterShare to FacebookShare to Pinterest
Labels: Buddha