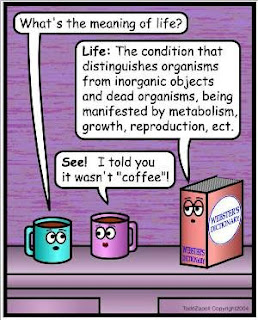 At some point, we all find ourselves contemplating the meaning of life. What is the purpose of all this? Why am I here?

I think I have an answer, not so much to these questions as to the motive of inquiry--in other words, why we're asking the questions in the first place. For I feel that only by addressing the root or cause of these existential questions can we hope to make some sense of the questions at all.

The foundation of the Buddha's teaching is that life is dukkha, which can be translated roughly as "suffering" or "unsatisfactoriness." He says this because life lacks the very things that we as psychological beings need most--stability, security, and certainty. It's the nature of life, of reality, to change, which is the cause of so much of our anxiety. In the face of impermanence, the expression, "Tomorrow is guaranteed to no one," echoes with ominous certainty. Anything can happen to us. I can drop dead in a minute, a year, a decade--there are no guarantees in life. We begin to ask, "What is the meaning of all this?" precisely because we are grasping at something solid--some bedrock that is immune to the conditional world that we perceive as so threatening. Any satisfactory answer, it would appear, would, or could only, be found in an unconditional state or realm free from dukkha. In other words, the meaning of life can't change (otherwise it wouldn't be the meaning of life!) and it must be universal, since it applies to all people at once. Already you can see the beginnings of an Absolute appearing.

But the problem with looking for the meaning of life outside or underneath or somehow hidden inside of life is that it subordinates life to this meaning/Absolute/God. Any view that uses life as a vehicle for meaning turns meaning into a master, and life into a slave. It puts the cart before the horse. What I'm suggesting is that we have this completely backwards. In other words, asking what the meaning of life is reduces life itself to a means to an ends (i.e., achieving the purpose or finding the meaning of life), and life should never be anything but an ends unto itself.

Let's look at the nature of meaning itself to make this clearer. What do we mean when we say that something has "meaning"? In linguistic terms, "meaning" refers to what a symbol or sign is pointing to. For instance, the word "tree" is a signifier that refers to some phenomenon or signified in the world. It points to something outside of itself. To relate back to our discussion, the very nature of "the meaning of life" implies that life is a signifier (a symbol of sorts capable of containing meaning, in much the same way as a word does) pointing to something beyond itself. As we can see, this kind of thinking subordinates life into the role of a servant whose sole purpose is to fulfill this "meaning."

The problem with asking, "What is the meaning of life?" lies in the question itself. It relegates life to a servant status. To quote one of my favorite movies, My Cousin Vinny, the problem is that "It's a bullshit question!" To ask it at all is to assume that there is a meaning to begin with. Modifying it to "Is there a meaning to life?" is no better; it's just as loaded of a question, in that the language still subtly presupposes a meaning exists, so much so that if someone were to answer "no" he would be accused of being a nihilist. The very use of the word "meaning" creates an artificial value system that does not correspond to anything in reality; for meaning is a human construction.

As humans, we commonly make the mistake of thinking that the world functions in the same way as we think. That's an egregious fallacy. The purpose of meaning, or thought itself, is functional--to help us navigate through the world. But once we fool ourselves into believing that thoughts have any sort of empirical reality, the tail is wagging the dog. It's like a machine taking control of its creator. I am reminded of an old Buddhist saying, "Mind is a good servant, but a bad master."

But let's explore this supposed meaning of life before we dismiss it completely. Presuppose for a moment that there was one, and for argument's sake we'll take the popular candidate "happiness." If the meaning of life were to be happy, then wouldn't that pit my meaning against yours?--for often times what makes you happy makes me unhappy. So whose happiness is given priority? And what happens when we're not happy, are we failing the meaning of life? The very question traps us into an absurdly impossible dualism, for there is no happiness without sadness. The same goes for any answer--"finding God" implies that you and God are distinct and separate'; "falling in love" means you are missing something right now.

So the more we examine the question, we see that asking "What is the meaning of life?" is just as absurd as asking, "What is the meaning of a rock? Or rain?" A tree is a tree; it has no meaning. It certainly has a purpose, but its purpose doesn't point beyond its own existence. In fact, its purpose is this moment--to be, to live. Why should humans be any different? What I'm suggesting is that life serves no other purpose than life itself. To see it any other way is a form of life-denial, not in the sense that we renounce life, but that we defer it to some higher reality or moment beyond this one. I can think of no greater mistake, or insult to life.

Life is it's own master. This moment, being life itself, does not point to anything beyond itself. Part of our resistance to this fact stems from confusing meaning with purpose. What I'm suggesting is that life is indeed meaningless, but not purposeless. In fact, life is its own purpose. This moment, your life as it is, is everything. So we can have purpose without meaning.

Anyone who tells you that life has a meaning is selling you something, whether it be a doctrine, a religion, or a product (all of which, at some level, amount to the same thing: something you need to "buy"). As Buddhists, we should be particularly wary of meaning--on a relative or Absolute level--in that it reeks of a self or fixed identity. The Buddha clearly challenged the notion of centrality or self-hood, so we should be cautious of adopting a worldview that subtly endorses one.

Charlotte Joko Beck tells us that we need to lose all hope. Abandon it completely. Give up the hope for salvation, that your life is going to get better, that you will ever find the meaning of life. This may sound bleak, but it's not; it's actually very empowering. What it tells us is that as long as we hope to find or change something, we're subjugating or deferring life. There is only this moment, and it's perfect. And so are we, for that's what we are--this moment. It's all we have, all we are.

That's what the Buddha taught--we are already perfect. It's the act of looking for a meaning--the assumption that something is wrong, and that the purpose of our life is somehow outside of us or this moment--that causes us suffering. To ask the question is to inflict the very dukkha that the question itself is trying to relieve! What we think is medicine is really poison--saltwater. The more we pursue meaning, the more the purpose of this moment eludes us, and thus the more we suffer. To ask is to deny life as it is and chase after some illusory panacea. For the answer is right before us. We, as life, are it.

There's a second part to Charlotte Beck's teaching. After we lose hope, we start to trust. We surrender to life itself. We stop fighting and resisting. For that's what pursuing the meaning of life really is--a denial of this moment. It's an insidious way of saying, "This can't be it. There's more to life than this." But there isn't. This is it: deny it or embrace it; it's your choice.

That's where zazen comes in. As we sit, we become the stillness, the confusion, the moment. Meaning drops off with the ego and thinking mind, and there is only life. Zazen is the ultimate life-affirming action, a way of paying reverence to the unfolding of life as this moment.

Thich Nhat Hanh poses the greatest challenge I have ever heard. "If you're not happy now, then you never will be." I'll rephrase it as a question: "If you're not happy right now, in this very moment, then when will you ever be?" To me, that's a much better question than, "What's the meaning of life?" For it actually has an answer.