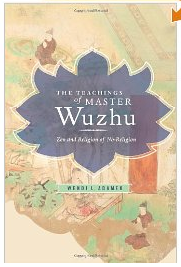 2 AM, with open hands and an open heart 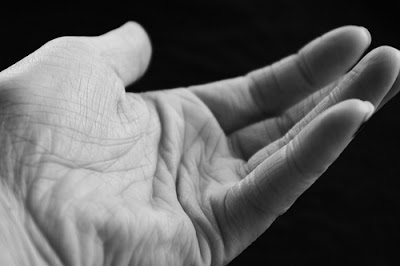 Last night I had an enormously powerful experience. My two-year-old son has been having trouble sleeping lately. He wakes up, wants to crawl into bed with my wife and me, then wants to move downstairs to the couch where he demands juice, and eventually wants to return upstairs to our bed. Over and over again this happens in one night. Up and down the stairs. And as the night winds on, he gets more and more tired, and thus less coherent and more frustrated.
At one point, around 2 AM, I came downstairs with him. I was still groggy from having awakened after about two hours sleep. We laid on the couch together for a few minutes before he grew restless again and wanted to walk around.
Eventually my wife joined us. At one point he had a 10-minute temper tantrum while he screamed, "Juice! Juice!" at the top of his lungs. I swear, I don't even want to know what my neighbors think.
It was during this screaming fit that I closed my eyes and concentrated on my breathing. Now I don't know about you, but a screaming child is the most horrible sound I can imagine hearing. Seriously. It cuts rights through my nerves.
So I just lay there on the living room floor, cuddled with the world's smallest blankets, and listened to him wail. He was utterly inconsolable, but we weren't about to give in to his demands because his appetite for juice is insatiable, and within another twenty minutes he would just demand more.
In about ten years, this might make for an amusing anecdote in my autobiography, but not last night. There was nothing funny about it.
And not just because I was tired and my nerves were fraying. There came a point when I just let down all of my ego defenses and opened myself up to his suffering. I was too tired to think about me. All that mattered was this poor screaming child. He was exhausted, frustrated, and in his mind, all he was wanted was a damn drink of juice. So why wouldn't his parents comply?
Eventually he calmed down and joined my wife on the couch. And we lay there, the three of us, me on the floor, and them on the couch--exhausted beyond belief, but fully there for one another.
I didn't have any mystical empathetic experience. What I did feel was a profound connection to another human being's pain, and for the most amazing ten minutes all I wanted to do was relieve his suffering. Which paradoxically didn't mean that I was going to give him juice, because he had had his share for the night.
What he needed was patience and tenderness, not juice.
It was an amazing moment. It was one of the most profound experiences I have had as a Buddhist and as a father.
The Bodhisattva's Vow, "Beings are numberless, I vow to save...," took on a whole new meaning last night. It was no longer outside of me, a vow to be fulfilled.
It was inside of me; I was it. Now I understand why Avalokiteshvara has so many hands.
Many thanks to all the Buddhas and Bodhisattvas who made this possible. And special thanks to Rev. Lynch for all you have taught me. None of this would be possible without you.
Photo borrowed from Creative Commons flickr user: AmyZZZ1.
Posted by Unknown at 7:17 AM 3 comments:

Is this the helpful? 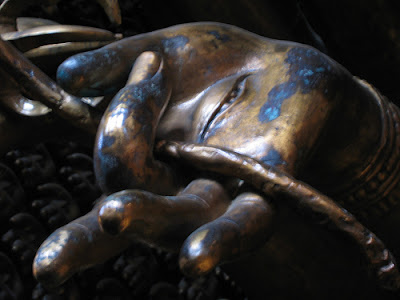 That's the question that I'm asking myself more and more often lately. Is this the most compassionate, skillful way I can respond? Is this the most helpful thing I can say? Maybe it's my koan practice bearing fruit, my daily recitation of the Bodhisattva's Vow, or just New Years' momentum, but I'm dedicating my energy and practice to cultivating a clear mind and skillful action.
I've been catching myself before I grumble a snide remark or even eat before my children do. I even--but please don't tell my wife--want to help out around the house more.
Bodhisattvas dedicate their lives to helping others, and there's no time like the present to start really walking that path. I genuinely want to make that commitment, and feel capable of it because, lately, I feel clearer. There's a term in pregnancy called effacing, when a woman's cervix is thinning before the baby is ready to be born. That's kind of how I feel lately.
Cleaner, less cluttered. Almost translucent.
In addition to the unwavering support of my wife and children, I have only my teachers, ancestors, and the Buddha to thank.

Photo borrowed from Creative Commons flickr user: moonpointer 1.
Posted by Unknown at 7:12 AM No comments:

Email ThisBlogThis!Share to TwitterShare to FacebookShare to Pinterest
Labels: Bodhisattva 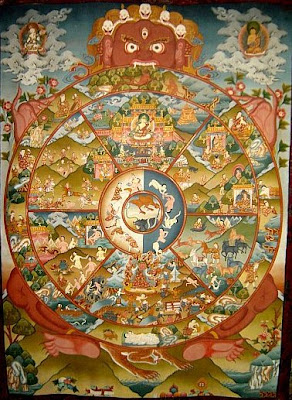 Anyone familiar with Buddhism has seen the Wheel of Life before. It's central to Buddhist, especially Vajrayana, iconography. At the center sits the serpent, pig, and cock, representative of the three poisons in Buddhism--greed, hatred, and ignorance. The six surrounding panels depict the six realms of existence--human, animal, god realm, hungry ghosts, etc. Each spoke symbolizes one of the Eight Noble Truths. And encircling the entire tableau are the 12 panels characterizing dependent origination. Looming above the wheel is Yama, Lord of the Dead, a ghastly looking demon with three eyes, a skull crown and claws that rival Freddy Krueger's.
At least that's how the wheel is commonly understood. But I think there's another way of interpreting this rich symbol system. I agree with everything inside the wheel--samsara, the world of delusion and duality. I do, however, have a hard time fitting Yama into the whole scheme. I've always wondered, Why is death hovering in the background? Is death the culprit in this cycle of rebirth?
I don't think so. For me, the demonic figure in the background is the ego, the illusory false self that invisibly pulls all of our puppet strings. There's one thing that everyone in this world has in common (at least at some point in their lives)--they think that there is some central I or self operating inside their heads. The ghost in the machinery, it's called.
The Buddha identified this form of self-attachment and clinging as the central impetus for suffering and future rebirth. So I have never understood why the demon is Yama and not the true tyrant, the core existential belief that there is some essential "I" inside me that exists separately and independent of conditions.
Greed and hatred stem from this primary delusion. War, theft, murder, alienation, fear, anxiety, all find their roots in the belief of an I who exists in opposition to a world of external objects. Even the primary human fear of death finds its source in the ego, for if there is no I, then why fear death? According to the Buddha, it's grasping at some I-ness that thrusts us into future rebirths and creates human misery. No self means no problems.
Which is why I would like offer this alternative interpretation of the Wheel of Life, and Yama in particular. It is the false belief in a self, and its consummate self-grasping, that looms invisibly in the darkness behind the wheel of life.
Posted by Unknown at 6:03 PM No comments: