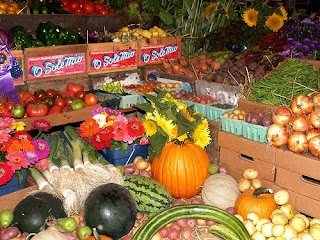 I've been a vegetarian for a couple years now, ever since I started taking my practice seriously. I felt hypocritical vowing to save all sentient beings while I still ate meat.

Umm, yeah I'll save everyone in universe...once I finish this cheeseburger.

Thich Nhat Hanh's work influenced my decision a lot. In his bestselling title Anger, he talks about how, when we consume meat, we ingest all of the suffering that these animals endure--we're eating all of their pain and terror. That shook me to the core. Whether or not it's true, the image was too chilling for me to ignore.

For some reason, people always ask me the "vegetarian question," as I like to call it: why I don't eat meat. Rather than tell them I'm a Buddhist who has taken a vow not to kill--that essentially I see eating meat as a moral issue, the same way many Christians see abortion--I just tell them I think there's enough suffering in the world. So why would I want to contribute to it?

The problem, as I see it, is that too many people think that the world was created for them. Literally, they think the earth is a playground made for humans. As Ken Wilber would put it, it's a question of moral development. And let's face it, most people are about as morally developed as a caveman.

For example, someone asked me "the question" the other day: "Why don't you eat meat?"

Jokingly, I said, "Thou shalt not kill."

He shook his head. "That only applies to humans."

"Tell that to the cow," I replied.

Generally speaking, Buddhists don't believe that it's okay to kill some animals--those with four legs or wings--and not others--those with two legs and arms. Or at least this Buddhist doesn't.

Which is why my wife and I are taking the final plunge. Duh duh dun..into veganism. Yikes, it sound scary just to say it. (Not to mention veganism sounds like a cult. They should change then name to something more inviting, less imposing like veggievores.)

Today was my first day and it was tough, much harder than the transition to vegetarianism. I already miss my yogurt and milk. It's a whole lifestyle change--no pizza, eggs, even birthday cake. Heck, most types of chocolate is off limits!

But when it comes down to satisfying my tastes or eliminating the suffering of other beings, I'll accept the inconvenience.

After all, the Bodhisattva vow is to save all sentient beings, even those I had no intention to eat but continued to use for eggs and milk.