Not to harm a fly 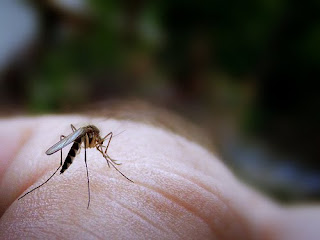 This weekend I had company over. The weather was gorgeous, and so we ate outside. By sundown the mosquitoes were on the hunt. I try not to kill mosquitoes, so when I caught one on my arm, I tried my best to brush it off. I started this habit a couple years ago, about the same time I became serious about Buddhism. Sometimes, accidentally, the mosquito dies in the process.

If I spot a spider in the house, I try to catch it under a cup and release it outside. The same goes for beetles, ants, or other creepy crawlies. You get the picture.

I have to admit, sometimes I feel silly. It is, after all, only a bug, right? What's the big deal?

As a high school teacher I'm very critical of teenager's behavior. (Ten years in the classroom will do that to you!) If there's one thing that I've learned from teaching it's that kids and adults are not that different. The same attitude that upsets me in teenagers is prevalent in most adults I know--namely that they think the world exists for them. Literally, that the world was created for them: animals exist so we can make Big Macs out of them, and trees grow so we can cut them down to make notebooks out of them.

They think that the world was created for humans to do with as they please. To them, Earth is a giant playground for people to have fun in. Or worse still, a giant diaper... (you imagine the rest)

That's why Buddhism is so radical. Buddhists understand that, not only does every action have a consequence (karma), but that the world is a vast interconnected network, so that what I do affects you, and vice versa. In that way, Buddhists are committed to living mindfully to insure that they cause as little harm as possible (which is not to say that you won't find so-called "Buddhists" doing unsavory or unethical things--far from it!).

To come back to our little blood-sucking insect, the reason I don't kill them is not because I think I'll generate bad karma or that squishing the bug will have disastrous environmental consequences in the unforeseen future, but because I know that the way I treat a bug translates to how I treat other people, to how I interact with the world as a whole. If I think that a bug is annoying and squash it for entertainment or because its mere existence is "inconvenient" to me, then how tolerant and compassionate can I really be? (Alan Watts has a great spiel about this, where he criticizes humans for being selfish: we feed off of the world, consuming countless plants and animals throughout the course of our lives, but can't even spare a single drop of blood for another creature. How true it is!) The way we treat an insect, as small and insignificant as it may appear to us, reflects our relationship to the entire world.

That's why I became a vegetarian. I can survive without eating meat, so why make another living being suffer because I don't want to be inconvenienced by adjusting my diet?

That being said, what would I do if my house was infested with termites? I'd hire an exterminator. The Buddhist precept against killing is just that--a precept. It's not a commandment passed down from "up high," something to be clung to at all costs; it's a general rule for living. And like all rules, life will force us into situations where we must make exceptions. My house is built out of wood, the byproduct of dead trees. That's a fact, one that no amount of idealism will change. We live in a world where we must kill other beings in order to survive. As unfortunate as that is, it's a biological fact--right up there with the truth of impermanence itself.

I'm still far from seeing myself and "others" as the same, but I try my best not kill mosquitoes, or spiders, or ants. They are part of this world too, and have every right to live. (Until they threaten the integrity of my home, that is!) If my body or circumstances demanded it (if, say, I was trapped at the bottom of a well), I would eat an animal to survive. But only if I had to. The mosquitoes in New Jersey don't carry malaria or some other life-threatening disease, so I won't kill them on sight. I'll brush them away. For how I treat them reflects how I view others.

None of this makes me better or superior than anyone else. And yet, I do think it makes a difference--admittedly a small one, but a difference nonetheless. I try to make the world a better place, or at the very least, not a worse one.

I think that, more than anything else, is what makes me proud to be a Buddhist.