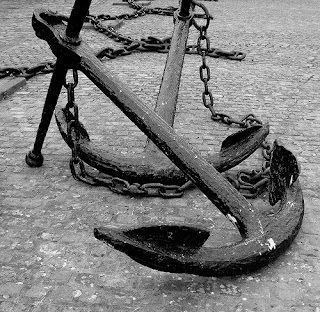 Over the past several months, the core of my practice has been mindfulness and labeling rogue thoughts as they arise. I learned the technique from Charlotte Joko Beck's Nothing Special, and its emphasis on using emotions and everyday mind states as practice is what drew me to the Ordinary Mind Zen school. In the past, trying to practice mindfulness, during meditation or while unloading the dishwasher, I would simply note a thought as it arose, let it go, and return to an open awareness of my breathing and other bodily sensations. But the difficulty, I found, is that the thoughts would almost immediately return. Pesky little devils!

Now, when I stop, acknowledge the thought with a label such as, "Thinking about meditation again" or "Angry about so-and-so's comment," the thought tends to stay away. Sure, it will rise again, but less frequently. It's as though the label is an anchor weighing the thought down.
An additional advantage of labeling is that it allows me to mentally catalogue which thoughts repeat themselves--to identify where I'm stuck. Whereas when I simply snapped myself awake and returned to the breath or the task at hand (as was my former practice), I lost a vital opportunity to track my thoughts. Now I can monitor what patterns are arising? What rut do I keep falling into?

This practice brings everything to the forefront of my awareness. It shines the light of attention on those slippery little thoughts that tend to slither in beneath the radar of my mind, the pesky ones that just keep returning. It identifies them so that the next time I spot them I say, "Oh you again?" Once I identify a thought, it's hard to overlook it or pretend I haven't seen it when it keeps surfacing.
But like any practice there are pitfalls: it's easy to get caught in the act of labeling and try to analyze or engage the thought itself. That's a trap. It takes practice to get the hang of spotting the thought, gently acknowledging it, applying a label, and then letting it go. But I definitely think it's worth it.

Give it a try.